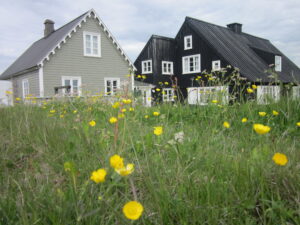 The Árnessýsla Heritage Museum is located in Eyrarbakki, a seaside village of about 600 people, sixty kilometres from Iceland’s capital, Reykjavík. Eyrarbakki is a place of historic significance dating back to the time of the settlement of Iceland around 900 AD, and for a long time it was a center of transport and commerce in south Iceland. The museum buildings comprise: The House – a merchant‘s home and related buildings dating from 1765; the Egg House; the Maritime Museum; Kirkjubær – a village house dating from 1920; and a baiting shed by the sea.

Húsið (The House) at Eyrarbakki is one of Iceland’s oldest buildings, built in 1765 when Danish merchants were allowed to overwinter in Iceland for the first time. 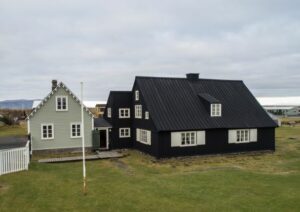 Merchant families lived in the House for almost two centuries and over that period the House was the center for art and European culture in Iceland; fashion, music and literature spreading from there throughout the country.  One can view the entire building from top to bottom and its history lies at each footstep. In the dining room are held special exhibitions. In the annex, called the Assistant’s House, are selected elements from the history of the province available to visitors, such as a new exhibit of Icelandic travels to the New World. North of the Assistant’s House is the Egg House, which contains an interesting nature exhibit.

Near the House is the Eyrarbakki Maritime Museum. It tells of the fishermen, craftsmen and social lives of the people of Eyrarbakki in the period from 1850 to 1950. 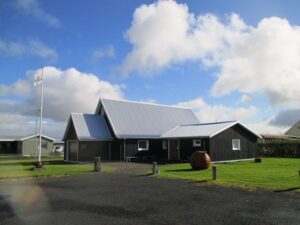 Kirkjubær is the latest addition to the museums of Eyrarbakki. Kirkjubær, a small wooden house built in 1920, was the home of common people and a summer home in recent decades.

Today it hosts a very interesting exhibition called Dream of the Century’s Child which tells of the common people’s lives and hopes during the period from 1920 to 1940. 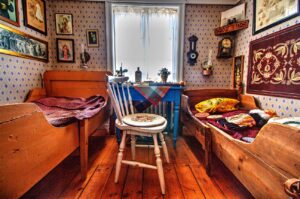